The Curiouser Top Ten Games of 2019

This year my SNES Classic Mini was finally joined by its previously impossible to buy NES sibling, plus a C64 Mini and almost a PlayStation Classic – I cancelled the day before it was shipped, not because of the controversial games list, but it just sounded like the finished article was very bare-bones and the emulation was crap. On the ones I didn’t cancel, I’ve loved pretty much everything on them more than anything that will ever be released again. On a similar note, I also love most of the old NES stuff that came with the Switch online service – especially the wonderful Tecmo Bowl, Balloon Fight and Mighty Bomb Jack. And on another similar note, I’ve loved playing a ton of the Switch Arcade Archives releases of Donkey Kong and 10-Yard fight, as well as ACA NEOGEO Super Sidekicks 3, and the fabulous Megadrive and SNK collections. And with a Switch now in my possession, Mario Kart 8 Deluxe and Golf Story from last year, and of course, Breath of the Wild, which I sandwiched between Ocarina of Time and the original Legend of Zelda (which I played on two different platforms almost in parallel).

Hovering just outside this list would be the Williams packs on Pinball FX, featuring some of the best tables ever produced; last-gen racing powerhouse Burnout Paradise Remastered on PS4; Castlevania Requiem (if I’d played a enough of either game included in time); and a game I’ve seriously been waiting 25 years to play, Night Trap on the Switch, which might not be the most mechanically-varied game ever, but was a technical marvel at the time and is still a fun romp today. I’m sure that had I played it yet, Red Dead Redemption 2 would be somewhere around the top, but finally playing and completing Mad Max just before it was released only confirmed I’m a bit done with open worlds at the moment, and I’ve more than enough to keep me going until they finish patching it and the price drops. And I’d have loved to have Tetris Effect on here, but after fifteen minutes of my first game on the beta, the motion sickness began…

As always, the rule here is if it’s been released for the first time on a platform this year, it’s fair game…

The very last game I bought in 2018 (at time of writing on Christmas Eve at least). If you ever wanted to convince a non-gamer that gaming is an art form, you’d show them this, because it really is a wonderful piece of art in anyone’s language. I don’t think I’ve ever seen (and probably heard) anything quite as stunning as this on any platform, and maybe aside from Journey, anything as powerful. It’s a dream to play, and a dream to experience as it becomes more and more beautiful as you progress, and subtly more complex. A genuine gaming masterpiece.

I avoided buying Minit when it came out on other platforms in the hope it would appear on Switch one day, which seemed like the right place for it, and that day came but a few horrendously hot months later. Bizarre premise of your hero living for only sixty seconds in an old-school Zelda-esque black and white pixel art rogue-lite world, doing simple quests, solving puzzles and killing monsters. Sixty seconds at a time. But it really works! It begins with almost no context or instruction, but you soon work out how things work to progress your story, planning out your next sixty second life as you carry out the next set of activities for this one. Fantastic game, very different, and perfect on the Switch. And when you’re done with the story, there’s a couple more hours picking up the stuff you probably missed then new game plus where sixty becomes forty. Future cult classic!

That wonderful Stardew Valley vibe where minutes are actually hours. But with more fighting. Moonlighter is a greeat rogue-like by night, and shopkeeper-sim by day, where you kill for booty to sell to buy armour, weapons, upgrades, better shop stuff and things to liven up your town so you can access new dungeons with better booty. Fantastic to play day or night.

I searched Tokyo in 40 degree heat and 90% humidity for this bundled with the physical drum controller. I failed, but not long after it was all announced for European release and everything was well in the world again. I can’t remember the last time I had a stupid grin on my face playing a game, but there’s little here not to smile about, from the real drum you play along to a huge, bizarre playlist with, to the completely bonkers visual feast that could only come out of Japan happening on the screen. The ultimate party game, even if you’re the only one invited.

I never played Mario Tennis on the Game Boy Colour or Advance, so don’t lament the depth of their story modes apparently missing here. I did, however, sink dozens, if not hundreds of hours into Tennis (featuring Mario as umpire) on the original Game Boy. Jump into an online tournament on Mario Tennis Aces on the Switch, and that’s what you’ve got, dialled up to eleven with trick shots, specials, bullet-time and more, and all against real other people. There’s depth here too – after a few hours you start to notice little things that stack up to make all the difference; you work out how to properly use the trick shot or the blue glow around the ball or the star that sometimes appears on the ground or a dozen other minor things; and then you start winning one in five matches, then one in three, then two, and you’re reaching (and occasionally winning) tournament finals… Stunning looking game, polished to hell, full of character, and utterly addictive. Who cares about story modes (which is actually pretty enjoyable too)!

Specifically here for the first 30 hours, then another 15 hours after 36 hours, then a few more after 53 hours. I absolutely hated everything in between and deleted the game twice in disgust at two bosses I just couldn’t beat. Until I did. Very few games over the last almost forty years have hooked me like this gorgeous looking, vast metroidvania did – even when it was gone, it kept dragging me back. 80% love, 20% pure hatred, and probably the best £7.99 I ever spent on a game.

I’ve played the original Alto’s Adventure more than any other game on mobile (or tablet in my case). It’s the perfect, premium mobile game, and has been my go-to time-passer across thousands and thousands of miles on plane journeys over the last few years. Alto’s Odyssey swaps snowboards for sandboards, but is more of the same, and then some. The new desert backdrop is stunning, and the day/night cycles, variable weather – especially the storms – and multiple biomes to explore make for some outstanding eye-candy. And the one-touch, backflipping gameplay remains as challenging, skilful and perfect as ever.

8 Bloodstained: Curse of the Moon (Switch)

Old-school Castlevania in all but name with some really clever character-switching mechanics, atmospheric old-school graphics and sound that make me want to live in it, and plenty to explore and go back to when you’re able. In the five hours or so to complete first time, it gets progressively more tricky, but aside from a few frustrating sections (generally involving moving platforms in the late game), it’s all do-able after a few attempts and some experimentation with the characters, even on veteran mode. My only gripe is the checkpointing on the double final boss battle – going back to the very start is a real pain while you’re dying over and over again to learn how to beat the second part! Once you’re finally done, definitely worth playing the newly unlocked nightmare mode to explore those places you couldn’t before you had the right characters available. Great game with a lot of retro-love oozing out of it.

Much like Zelda, I’d never played a Mega Man game before this year, and now I’ve played and finished three of them; 2, 1 and 3, in that order. I’m particularly proud of finishing Mega Man 2, over a period of months, as I completely avoided all the quality of life enhancements like rewind and save in-progress that come with this wonderfully presented collection of games 1-6 in the series. It’s not just the games though, most of which are bonafide hardcore classics; those enhancements, the mass of settings options and the museum of art that accompanies every game make it one of the best compilations I’ve seen. And it’s the reason why Mega Man 11 is missing – I’ve played the demo dozens of times and it’s awesome, and would certainly deserve to be here in place of this from what I’ve seen, but I’m going to be busy with games 4-6, as well as the Mega Man X game on the SNES Classic Mini, for some time yet!

There’s still pixel-art everywhere this year, but this really is a marvellous lesson in pixel-art design, and a great Metroidvania game to boot. The sky islands you navigate in this vertical platformer are diverse and stunning. Controlling your owl boy feels great. The evolution of the game mechanics works brilliantly as you meet new partners in crime. And those characters are ones you really care about as you make your way through the thought provoking story. Another brilliant Switch indie.

The majority of my limited gaming time this year seems to have been spent in last year’s The Witcher 3, which eventually got finished just before Christmas. Absolutely loved it but had had my fill after sixty hours. Also want to mention Until Dawn, which would have been near the top of last year’s top ten had I played it in time. I got my first platinum trophy with another favourite game from last year, Rocket League, and finally got to play and complete something even older when Grim Fandango appeared as a PS+ freebie. Here’s games that actually came out this year; it’s a bit mobile heavy, mainly thanks to the above, and moving to an almost medieval house with an equally medieval internet connection.
Edited with BlogPad Pro

Zombie Goddess – Fantasy Apocalypse Game Attack Fight Slash Evil Slayer with Sword when Angry was unleashed on the App Store today. It features “the hot chick from Resident Evil without the guns” and you can turn on a “breast jiggle” feature. And it’s free!

In 1998, a primitive first-person shooter called Zombie Massacre appeared on the Amiga.

In 2011, master of terrible horror video game adaptations, Uwe Boll, has his mitts on the movie rights.

God only knows why, but here’s a sneak at the poster for anyone that cares.

Playboy model (and their face of gaming) Jo Garcia, wearing little more than a huge selection of video games, consoles, peripherals and bits of wire from the last 30 years! 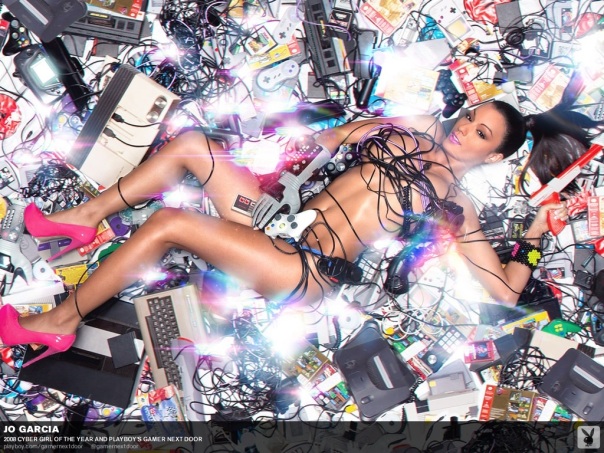